Perfume: The Story of a Murderer Review 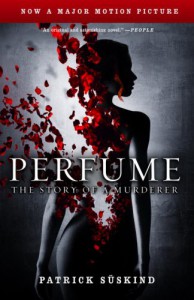 This book. Wow. I started off wanting more than anything to love it, looking past any of the little things that bugged me. Suskind wrote in long sentences. At times he seemed to lose his train of thought only to hurriedly finish the thought at the end of a daunting sentence. He also would list things not in a way that I thought, "Look at how descriptive he is!" but rather, "Why do I need to know every flower in this room?" But amongst these annoyances there were things I adored. When a character was parting from the story for good he told what happened to them in the rest of their life. He had a way with words and descriptions that made me keep reading just knowing that it would be worth it. And after part one it definitely became worth it to me. In part two when Grenouille is in the church he thought something that actually made me shudder. And from that point on I didn't put the book down again when I could help it. And when forced to put the book down I returned to it as quickly as possible. I became engrossed by the book. I did in fact love it as I was determined to when starting on page 1. But despite loving the novel I was sorely disappointed by the last few chapters. The ending I didn't expect at all but I didn't exactly love. All in all I enjoyed the read and would recommend it.