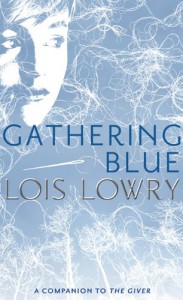 "Take pride in your pain. You are stronger than those who have none."Gathering Blue is the second installment in The Giver Quartet. When I read The Giver for the first time when I was a kid I wasn't even aware there were other books. When I learned there were I decided to read them now and see where Lois Lowry decided to take things.Gathering Blue isn't about Jonas from the first story at all, but rather is about Kira, a crippled teen who has a special talent for threading. The society this book centers around is as bad as the first books' albeit for completely different reasons. Here the pain and harshness are widespread. Lois Lowry does a great job writing believable characters. Even as an adult I enjoyed the way she told her story. I plan on finishing the series because she's set up an interesting dystopia and some great conflict. And I hope she's taking things where I see them going in my head, because if she is that's not "predictable" it's awesome. And as you'll hear me say a million times more, being predictable isn't an issue when done well.If you follow me at all you know I don't like to spoil anything, so I won't. I'll just say that I think the book was well-written, and if you've never gotten around to it you might as well. It's a short and enjoyable read.