Twenty-eight and a Half Wishes Review 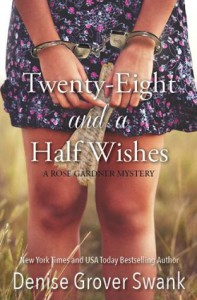 "You can't change the opinions of small minded people."

Rose, our main character, has lived with her abusive Momma for the last 24 years. (I think Momma must be a southern thing, I've never read a book that spells it the way I do.) After seeing a psychic vision of herself lying dead she realizes how little she's lived. With the thought of her demise looming she stands up for herself, talks back, and decides to get a little freedom for the first time ever. Unfortunately this could not have come at a worse time, her mother has been murdered and this ill-timed arguement has given her the role of main suspect. Can they stop the real killer before Rose's vision comes true?

This was a fun book, Rose makes an on the spot bucket list of things she wants to do before she dies. The things on the list are unbelievably simple, but are things she hasn't got to experience while being her mother's servant. It has a bit of romance, a dash of mystery, some long-hidden secrets, and a young girl just wanting to be her own person. The author, Denise Grover Swank, did a great job of making me care. I had no trouble getting into Rose's shoes and feeling the same emotions she experienced, annoyance with her mother, guilt towards her sister, attraction towards her neighbor. And it was consistent, i read the book quickly and eagerly and can't wait to read the second book soon.

It's a free kindle e-book so if you're looking for something to read at least you won't break the bank by choosing this. There are some things that aren't the best crappy doodles and the occasional over the top look here we're southern, for example. I say pick it up and try, who knows you may have found a new series you love at the end of the day.