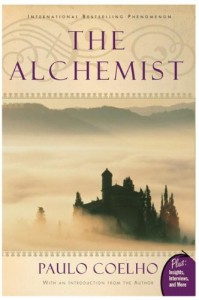 If I ever hear the words personal legend again I may lose it. This book went from ooh he's on an exciting adventure of self discovery to wow he's on a boring adventure where everyone he meets says the same thing. It got repetitive hearing, everything in the universe wants you to succeed, every few pages. I think I may be too much of a cynic for such an overly positive book. It was everything happens for a reason in book form and that reason was always positive and beneficial in the end. I guess in my eyes things aren't always for the best, and that's okay. Part of life is unexpected slip-ups. So a book about the meaning of life where there was always someone there to fix the issue in less than a day felt superficial.

Just so I don't ramble on for days I'll wrap things up.  I like to believe that much of the book's meaning was lost in translation. In English it felt like it tried to be profound and failed. This book has a big following, people shout how life changing it was, but I can't get on board. I didn't even enjoy the book the first time and it's spiritual claims were all overly positive and overall superficial. (yes I used that word already but that's what this book oozes.)

Final thought: Don't refer to your character as "the boy" and expect anyone to form attachments to him. Character development was non existent sadly. And by the end I had forgotten who Santiago was because the author never used his name.